I took delivery of Ralph yesterday (well, earlier today). Just introduced him to the world…

I’ve received my Raspberry Pi B, with case, an 8GB SD card with NOOBS, and a Gertboard for Arduino programming. Below is a picture:- 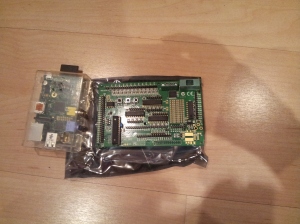 Doesn’t look anything special yet, but it soon will be!

Already installed Raspbian, set up the Pi with static IP on my home network, adding the pybrain library and dependencies, and the Arduino IDE, also set up the tightvncserver to run on boot, and set up the ssh server for remote terminal access.

Can’t use the Gertboard with the Pi in it’s case. Thinking of cutting a smallish hole in the side and using a ribbon cable…

I want to make sure the Gertboard is working. I think I’ll get the basic workflow of writing an Arduino app and publishing it done.

Considering the first Arduino app to be one that starts lighting the LEDs one after the other in a sequence when one of the board’s push buttons is pressed. Should be a decent test from the Pi.

Here he is all connected up (Ralph is the red dot, button centre – it’s his power light!):- 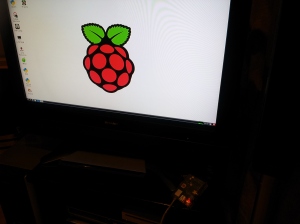